During the last 40 years the various methods of magnetic resonance spectroscopy have become standard tools in physics and analytical chemistry and found applications also in medical diagnostics. Magnetic resonance deals with magnetic dipole transitions, which occur usually in the radio- and microwave region of the electromagnetic spectrum. This results in a detection sensitivity of about 1012 spins (spins per Gauss), which can be reduced to 105 spins by exploiting optical detection methods. These double-resonance techniques take advantage from the fact that the magnetic resonance transition is accompanied by a change in the intensity of an optically detectable signal such as absorption or fluorescence.

In 1993 two independent co-operations succeeded by combining single-molecule spectroscopy with optically detected magnetic resonance to reach the ultimate limit in sensitivity of magnetic resonance: a single spin.
The Initial Idea and its Realisation.

The Initial Idea and its Realisation

This experiment will be explained briefly on the energy level diagram of a pentacene molecule, figure 1. 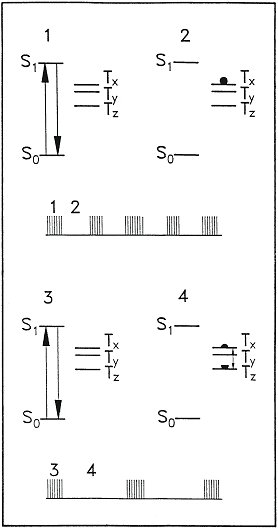 Figure 1: Schematic representation of a single-spin FDMR experiment. The upper part of the panel refers to a situation without microwaves whereas the lower part corresponds to a situation in presence of a resonant microwave field. For details see text. 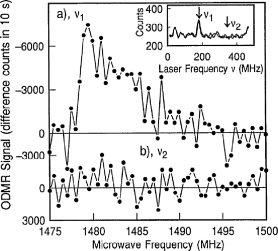 Figure 2: a) Change of the fluorescence intensity of an individual pentacene molecule as a function of the microwave frequency. The spectral range of the microwaves corresponds to the zero-field TX - TZ transition. b) The same experiment with the laser detuned from the optical resonance of the molecule, see inset.

Such an experiment has been performed successfully and its result is shown in fig. 2. The data show the decrease of the fluorescence of an individual pentacene molecule upon irradiation with microwaves that are resonant with the the zero-field TX - TZ transition triplet transition.

After the first successful demonstration of single-spin spectroscopy pentacene isotopomers, i.e. molecules with varying isotopic composition, have been studied. Owing to the extraordinary high quality of the host crystals the inhomogeneous linewidth of the optical transition was less than 800 MHz which allowed to resolve the optical absorptions of those pentacene molecules that contained one or two 13C atoms which are shifted by a few GHz to the blue with respect to the major absorption, fig.3.

Since in pentacene the densitiy of the electronic spin in the triplet state varies significantly across the molecule, the 13C nuclear magnetic moment acts as local probe which provides a handsome tool to either map out the distribution of the electronic spin wavefunction or vice versa to assign the position of the 13C substitution within the molecule. 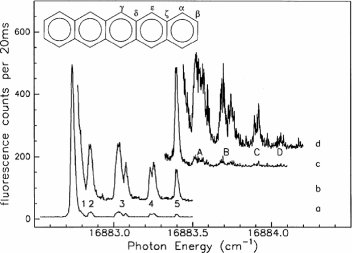 Figure 3: Fluorescence-excitation spectra form an ensemble of pentacene (C22H14) molecules embedded in p-terphenyl. The satellites numbered 1-5 result from pentacene molecules that contain a single 13C atom. The relative intensity of the satellites is 4:4:8:4:2 and reflects the six symmetry inequivalent carbon positions in pentacene, see inset. The subsatellites numbered A-D result from pentacene molecules that contain two 13C atoms. The intensity scale is valid for the lowest trace the other traces are offset and scaled for clarity.

An example is shown in the top part of fig.4 which compares the zero-field TY - TZ transition between the triplet sublevels of two individual pentacene molecules. The spectrum on the left hand side results from a pentacene molecule that contains exclusively 12C nuclei. The width of the line is caused by the hyperfine interaction of the electronic spin with the 14 hydrogen nuclear magnetic moments of pentacene. The asymmetric lineshape reflects the fact that this interaction is a second-order effect in zero magnetic field. On the right hand side, the same triplet transition is shown for a pentacene molecule that contains one 13C nucleus in the position marked by the dot. The increase of the linewidth with respect to the spectrum on the left hand side is caused by the additional hyperfine interaction with the 13C nuclear magnetic moment.

Another development pushed forward was single-spin spectroscopy in the presence of an external magnetic field. Exploiting the knowledge gained about the 13C substituted pentacene molecules we managed to observe the magnetic-resonance transition of an individual electronic spin that featured a hyperfine splitting owing to the interaction with a single nuclear spin. An example for this work is shown in the lower part of fig.5, which refers to pentacene molecules where 1H has been substituted by 2H in order to reduce the hydrogen hyperfine interaction. The spectra display the TX - TZ transition of an individual pentacene-d14 without any 13C (left) and with a single 13C (right) in the same position as previously. The spectra on the left hand side show a shift and a broadening upon applying an external magnetic field.

Figure 5: TX - TZ zero-field triplet transitions of pentacene-d14 in the presence of an external magnetic field. The left pattern refers to pentacence molecules without any 13C and the right part to pentacene molecules that contain a single 13C nucleus in the same position as previously.

The shift corresponds to to the well-known Zeeman effect and the broadening reflects that the hyperfine interaction with the 2H nuclear magnetic moments turns from a second-order to a first-order effect in the presence of a magnetic field. In addition to the shift and the broadening, the spectra on the right hand side show a splitting for non-zero magnetic field which results from the hyperfine interaction of the electronic spin with the 13C nuclear magnetic moment. For the guest/host combination pentacence-d14 in p-Terphenyl-d14 the combination of optical- and magnetic-resonance single-molecule spectroscopy allowed to select a specifically 1H-substituted pentacene molecule and to verify its isotopic composition. This protocol was employed to perform a study of the intersystem crossing rate from the singlet to the triplet manifold as a function of the isotopic composition of pentacene. It was found that the intersystem crossing is modulated by the variation of the energy difference between the electronic states due to changes of the vibrational zero-point energies, i.e. the isotope shift. Changing the mass of the vibrating atoms in the molecule by isotopic substitution results in a significant change of the intersystem crossing rates in a way that is approximately additive for multiple 1H substitutions within the same molecule. The intriguing feature of this study was that it did not require any tedious selective isotopic substitution using sophisticated chemistry because it was carried out on single molecules, whose isotopic composition is by definition unique and pure.