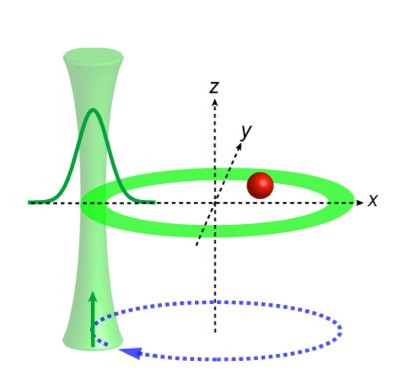 For single-particle tracking (SPT) the emission from an individual fluorescent particle is used to form a diffraction-limited image on a screen and the spatial position of the particle is reconstructed from the location of the maximum of the centroid of this image.

For single-particle orbit tracking (SPOT) the focus of the excitation light rotates on a circle that encloses the fluorescent particle in its centre. Then, upon any movement of the particle away from the centre of the circle, the intensity of the emitted fluorescence will be modulated with the rotation frequency of the light orbit. From the amplitude and the phase of this modulation, the lateral position of the particle can be reconstructed. An implemented feedback loop keeps the fluorescence signal constant by compensating the movement of the particle with a three-axis piezo stage. As long as the particle stays within the scan range of the piezo it cannot get lost by leaving the field of view, and therefore very long trajectories can be recorded.